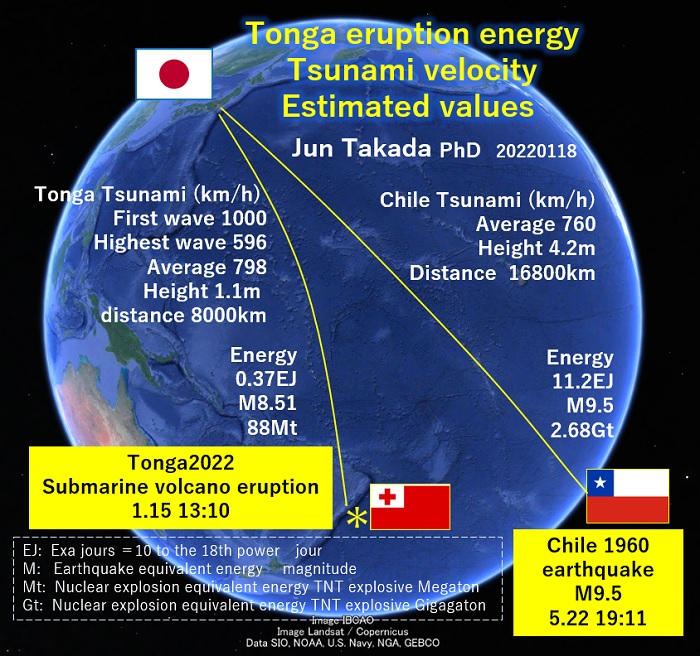 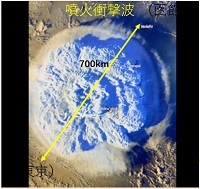 Research bulletin
The energy released from the Tonga submarine volcano eruption is 88 megatons in terms of TNT equivalent to a huge nuclear explosion.

The eruption of Tonga 2022 is global and is affected by tsunamis and eruptions.
The energy released during the volcanic eruption that caused it was estimated from the tsunami data that reached Japan.
The calculation method is the physics of tsunami propagation and the tsunami data that reached Japan from the Chile earthquake magnitude 9.5 in 1960.
Tonga eruption energy is 0.37EJ, earthquake equivalent magnitude 8.5, nuclear energy equivalent TNT 88 megaton.
It is 5.9 times as large as 15 megatons of the bikini hydrogen bomb 1954. However, there is no radioactivity.

The risk to the distance was a tsunami, but so far no deaths have been reported. There was a capsize of small vessels in Japan.

Another risk is the massive eruption from the Tongan submarine volcano explosion. Large-scale volcanic eruptions threaten global cooling. A large amount of sulfate aerosol is released into the atmosphere, blocking solar radiation and causing temporary cooling of the climate. In the future, there are concerns about insufficient harvesting of agricultural products.
The 1991 eruption of Mount Pinatubo in the Philippines has cooled the world. The record cold summer of 1993 is believed to have been caused by the eruption of Mount Pinatubo, which is said to be one of the largest in the 20th century. Summer temperatures were two to three degrees below normal.